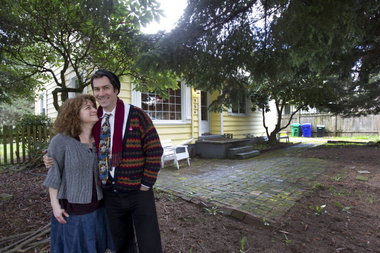 Lisa Conway and her husband twice tried to sell his old house when they  moved in together, but they couldn’t get enough to pay off the mortgage. So they switched their for-sale sign with a for-rent sign.
The couple never wanted to be landlords. Like many of the Portland  area’s newest landlords, they’re more used to cutting a rent check each  month than cashing one.
And like many other accidental landlords of the housing crisis, they’ve  learned being a landlord can have its pitfalls: in their case, a  tenant’s stripper pole that replaced a light fixture in the living room.
“We might add something to the lease,” Lisa Conway said Wednesday as she prepared to show the house to a new round of prospective tenants.
With Portland-area home prices near their lowest point since 2005, more  homeowners who have to move have turned to renting out their old house  while they wait out the market.
And to be sure, it’s a better time to be a landlord than to be selling a home. With the Portland-area rental vacancy near zero (the Census  Bureau put it at 2.9 percent at the end of last year compared with 9.4  percent nationwide) rents are on the rise, and it’s not difficult to get a tenant in place.

The Rental Housing Association of Greater Portland, which mostly represents small-scale landlords, says sales of its  starter kits for first-time rental owners have grown 60 percent since  2007. It increased the number of landlord classes it holds, and the  classes are still full.
“Myself, I’ve got two houses right now that I had never intended to have as rental units,” said association President Phil Owen, who also owns  apartment buildings. “Since I have them, and I can’t sell them for  anything, I might as well rent them.”
From nightmare tenants to middle-of-the-night emergencies, professional  landlords see it all. Those born of the housing crash, however, often  know little about what they’re getting into.
“We’d never even considered being landlords,” said Stephanie LaMonica.  “We just wanted to get rid of the house and move on to the next one.”
LaMonica and her husband bought a small North Portland house in 2005.  The dream, she said, was that the vineyard they started in The Dalles  would take off and they would work there full time.
The dream has played out a little more slowly than planned. When their  son, Samuel, now 4, was born, they needed to find a bigger place. Their  house was on the market for a little less than a year, but they couldn’t find a buyer. So they rented it out instead.
They’ve had three sets of tenants since 2010, who have all paid the rent on time and, more or less, kept up the house. But just recently, a  neighbor asked about the apple tree that had been cut down in the  backyard. That was news to LaMonica, who recalled her son’s birthday  party held under the tree.

“My expectations are probably too high,” she said. “I’m thankful we  didn’t have to sell that little house once I realized how emotionally  attached I am to it. But it’s hard to see what happens to it when we’re  not there, where my little boy grew up.”
Many find having a property manager can be valuable. Bryan Simmons  bought a house in Bethany but is holding off on selling his old house  until the market improves.
He’s hired Tindell & Co. Property Management to market the Bethany house and collect the rent. To save on fees, he takes on most of the maintenance himself.
“I’d never had a rental property before,” he said. “I heard the good and the bad. I heard you could do it on your own. I’ve also heard the  horror stories.”
Kurt Williams has one of the latter. Williams took out a second mortgage — a mistake, he says now — on the Southeast Portland house he bought  in 1986. When he lost his job, he decided to move out and rent the home.
Things started out well. But when his tenant started missing payments,  he fell into foreclosure. When his property manager evicted the tenant,  he found the place trashed: threadbare carpets, the water shut off for  nonpayment and garbage strewn about the house.
He should’ve turned away the tenant when her application didn’t pass  muster. But he’s not cut out to be a landlord, he said, because he’s not good at saying no.
“Having to deal with renters and stuff, it’s not my cup of tea,” he said. “I hate it. I don’t want anything to do with it.”
Owen, the Rental Housing Association president, said many would-be  landlords don’t have realistic expectations of what the job entails.  That can get them into trouble.
“If you’re going to have even one house, you’re going to have be a  professional landlord, and you’re going to have to be educated,” Owen  said. “It’s a job. It’s not a hobby. It’s not a part-time thing.”
–Elliot Njus