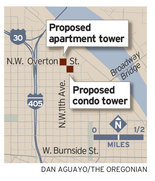 The Pearl District’s biggest landholder is laying the groundwork for two new
high-rises on the district’s North fringe, where development stalled during the
recession.

Hoyt Street Properties, which
controls eight undeveloped blocks in the area, is selling one for an apartment
building that could stretch 18 stories high. It would be built through a
partnership between a national developer based in Atlanta and two of Hoyt
Street’s four partners.

At the same time, the firm is submitting plans  for a condominium tower on one of its other blocks that, at up to 30 stories, could become the tallest building in the Pearl District.

Both buildings would be on Northwest Overton Street, adjacent to The Fields neighborhood park currently under construction.

The apartment project will go forward without Joe Weston, a partner at Hoyt Street who has provided the financial backing for its previous projects such as The Encore and The Metropolitan.