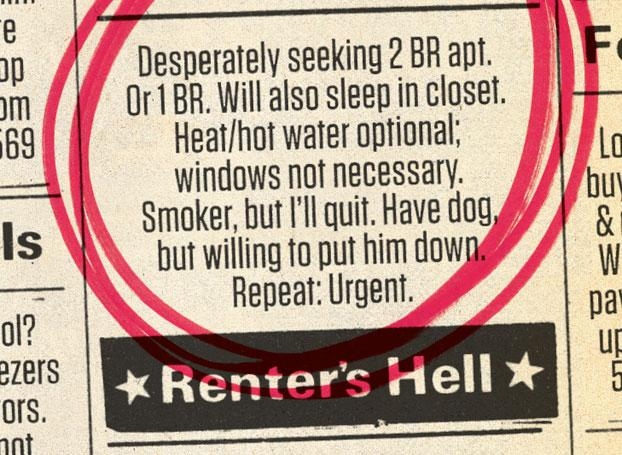 Out of Pocket
Related to:rentrental marketreal estate
The first place Lindsay Bozanich finally found to rent this year came with fingernail clippings in the bed.They probably belonged to the former resident of her $800 Murphy  bed-equipped studio apartment on Northwest 22nd Avenue and Glisan  Street—the person who painted the walls bright yellow and left the  kitchen and bathroom coated in so much grime they took hours to clean.But Bozanich, 29, was thrilled. Not with the filth, of course, but with the fact that after several weeks of searching, she had finally found an  apartment.

When her short-term lease ran out, it took even longer to find another  place—she and her future roommates spent two months looking. They  finally found a house in the Concordia neighborhood that, on their  initial visit, contained seven aquariums of assorted reptiles. They  grabbed it. (The reptiles later moved out.)

“I  couldn’t believe how fortunate we were,” Bozanich says, noting that  friends have looked even longer without finding a place that fit their  budget. “We really counted our blessings on this one.”

Portland has long had a reputation as an affordable West Coast city, boasting  rents that are lower on average than in Seattle or San Francisco.

But affordability only matters to people who can actually find an apartment.

The  Portland area has the tightest rental market of any major city in the  United States, according to the U.S. Census Bureau. Only 3 percent of  apartments here are vacant at any given time—half as many as were  available three years ago.

The days of apartment companies offering a month off or free parking are long gone. Apartment managers and landlords see people lined up outside rentals, many with  applications and blank checks in hand. Desperate renters are finding  places have been rented within minutes after being posted on Craigslist. Some renters have offered to pay above the advertised rent if it means  they can land the place.

“We’ll put something  up and hear within five minutes they’ve heard about a property and want  to have a viewing,” says Bette Durham, a broker at Mainlander Property  Management. “Unfortunately, we can’t pull extra properties out of our  hats.”

The fierce demand for apartments in short supply is causing Portland’s reputation for affordability to slip away.

Rents have risen 17  percent in the last five years in the Portland metro area, according to  the Metro Multifamily Housing Association, a trade group of landlords  and rental managers. That’s well above the national average of 12  percent during that same time. Read More – Willamette Week>