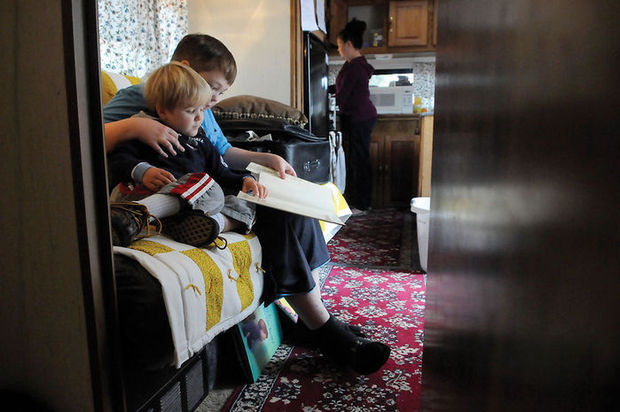 Ben Prevish, 13, shares a story with his brother, Gabe Clay, 3, while their mom, Elizabeth Prevish, prepares breakfast in the cramped camp trailer she is currently living in. Prevish says Corvallis-area landlords have repeatedly refused to accept her HUD housing voucher even though state law requires them to honor it. (AP)

CORVALLIS — Elizabeth Prevish knew it could be tough to find a house to rent in Corvallis, but she had no idea just how hard it would be when she decided to relocate from Redmond in May.

A single mom, Prevish has two sons, ages 3 and 13. The older boy struggles with a serious emotional disorder, and Prevish was thrilled when she got him placed in the Children’s Farm Home for inpatient treatment in January.

After months of making the three-hour drive across the mountains to visit her son, she got approval to transfer her federal housing benefits from Deschutes County to the mid-valley — but ran into a brick wall when she tried to use them in Corvallis.

So far, she says, half a dozen local landlords have refused to accept her Section 8 voucher — even though such discrimination is illegal under Oregon fair housing laws.