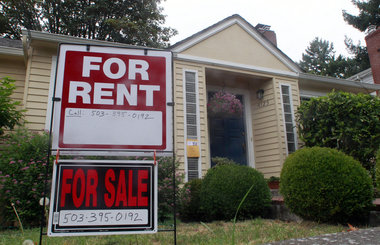 Rental vacancy and homeowner vacancy fell in the Portland area in 2011, according to the U.S. Census Bureau, while the homeownership rate stayed the same.
Rental vacancy fell to 3.4 percent, the city’s lowest rate since 1995 and the second-lowest in the nation.
The National Association of Realtors also reported last week that the Portland area boasted the second-lowest rental vacancy rate. Their data is based on a survey of commercial brokers.
Low vacancy led to rent hikes of 8 percent in a year, according to the most recent Metro Multifamily Housing Association survey released in October. It’s also led to a smattering of new construction projects, though most are fairly small in scale.
The Census Bureau says the Oxnard-Thousand Oaks-Ventura area in California is the No. 1 rental market. The national vacancy rate within major metro areas is 9.5 percent.
And homeowner vacancy, the number of houses left empty while waiting to be sold, fell to 2 percent. The number spiked to 4.8 percent in 2009 after the real estate market ground to a halt.
Since then, many homes for sale have been bought or pulled from the market and converted to rentals. Given the soft pricing, homeowners are less willing today to put their homes on the market, particularly if they are underwater. In 2011, the for-sale inventory in Portland has fallen to levels not seen in years, according to numbers reported by the Regional Multiple Listing Service.
Portland’s 2 percent homeowner vacancy is in the middle of the pack for the country’s 75 largest metro areas. The national homeowner vacancy rate in major cities is 2.5 percent.
The Portland-area homeownership rate in 2011 was flat at 63.7 percent, the same rate as 2010, and below the national homeownership rate, 64.6 percent.